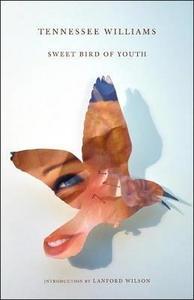 Sweet Bird of Youth is a 1959 play by Tennessee Williams which tells the story of a gigolo and drifter, Chance Wayne, who returns to his home town as the companion of a faded movie star, Alexandra Del Lago (travelling incognito as Princess Kosmonopolis), whom he hopes to use to help him break into the movies. The main reason for his homecoming is to get back what he had in his youth: primarily, his old girlfriend, whose father had run him out of town years before. The play was written for Tallulah Bankhead, a good friend of Williams. Sweet Bird of Youth originated around 1956 as two plays: a two-character version of the final play featuring only Chance and the Princess, and a one-act play titled The Pink Bedroom that was later developed into Act Two of the play, featuring Boss Finley and his family.
Read more or edit on Wikipedia