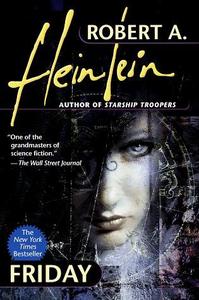 Friday is a 1982 science fiction novel by Robert A. Heinlein. It is the story of a female "artificial person", the eponymous Friday, genetically engineered to be stronger, faster, smarter, and generally better than normal humans. Artificial humans are widely resented, and much of the story deals with Friday's struggle both against prejudice and to conceal her enhanced attributes from other humans. The story is set in a Balkanized 21st century, in which the nations of the North American continent have been split up into a number of smaller states. Friday was nominated for the Nebula Award for Best Novel and the Hugo Award for Best Novel in 1983.
Read more or edit on Wikipedia