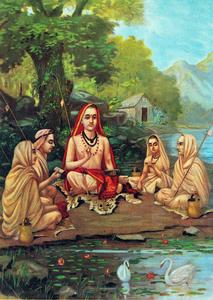 Adi Shankaracharya (Sanskrit: आदि शङ्कराचार्यः IAST: Ādi Śaṅkarācāryaḥ [aːdɪ ɕɐŋkɐraːtɕaːrjɐh]) (8th cent. CE) was an Indian philosopher and theologian whose works had a strong impact on the doctrine of Advaita Vedanta. He founded four mathas ("monasteries"), which are believed to have helped in the historical development, revival and propagation of Advaita Vedanta.According to tradition, he travelled across the Indian subcontinent to propagate his philosophy through discourses and debates with other thinkers, from both orthodox Hindu traditions and heterodox non-Hindu-traditions, including Buddhism, defeating his opponents in theological debates. His commentaries on the Prasthanatrayi Vedic canon (Brahma Sutras, Principal Upanishads and Bhagavad Gita) argue for the unity of Ātman and Nirguna Brahman "brahman without attributes," defending the liberating knowledge of the Self and the Upanishads as an independent means of knowledge against the ritually-oriented Mīmāṃsā school of Hinduism.Shankara's Advaita shows similarities with Mahayana Buddhism, despite his critiques; and Hindu Vaishnavist opponents have even accused Shankara of being a "crypto-Buddhist," a qualification which is rejected by the Advaita Vedanta tradition, highlighting their respective views on Atman, Anatta and Brahman. Shankara himself stated that Hinduism asserts "Ātman (Soul, Self) exists", whilst Buddhism asserts that there is "no Soul, no Self."Shankara has an unparallelled status in the tradition of Advaita Vedanta, and also had a strong influence on the Vedanta-tradition in general. Yet, while the main currents of modern Indian thought may have been derived from his doctrines, his influence on Hindu intellectual thought has been questioned, and the historical fame and cultural influence of Shankara may have grown centuries later after his death.Over 300 texts are attributed to his name, including commentaries (Bhāṣya), original philosophical expositions (Prakaraṇa grantha) and poetry (Stotra). However most of these are not authentic works of Shankara and are likely to be by his admirers or scholars whose name was also Shankaracharya. Authentic are the Brahmasutrabhasya, his commentaries on ten Mukhya (principal) Upanishads, his commentary on the Bhagavad Gita, and the Upadesasahasri. The authenticity of Shankara being the author of Vivekacūḍāmaṇi has been questioned. Adi Shankara is also believed to be the organiser of the Dashanami monastic order and unified the Shanmata tradition of worship.
Read more or edit on Wikipedia