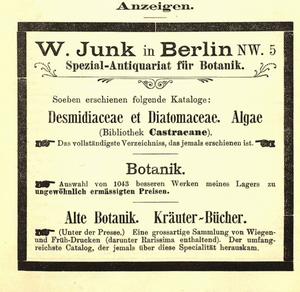 Wilhelm Junk (3 February 1866, Prague – 3 December 1942, The Hague) was a noted Czech antiquarian bookseller in the field of natural history, and an entomologist. Wilhelm Junk established his book dealership "Antiquariaat Junk", in 1899 in Berlin. He soon became the leading dealer in works on natural history in Europe. Junk also edited and published reference works, notably Lepidopterorum Catalogus edited by Embrik Strand, and Coleopterorum Catalogus edited by Junk himself and Sigmund Schenkling. A Jewish refugee, he moved his shop to The Hague in the 1930s. He sold his business to Rudolph Schierenberg in 1935. It still operates as "Antiquariaat Junk". He was a Doctor of Philosophy honoris causae, an honour conferred by the Humboldt University of Berlin.
Read more or edit on Wikipedia