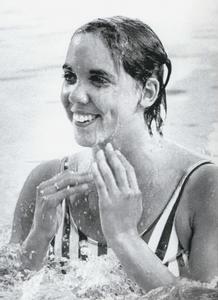 Jennifer Jo Kemp (born May 28, 1955) is an American former competition swimmer, Olympic champion, and former world record-holder. At the 1972 Olympics she won a gold medal in the 4×100-meter freestyle relay, setting a world record, and reached semifinals of the individual 100-meter freestyle event.Kemp initially specialized in the backstroke before changing to freestyle in 1971. Next year she won the 100 m AAU title.
Read more or edit on Wikipedia