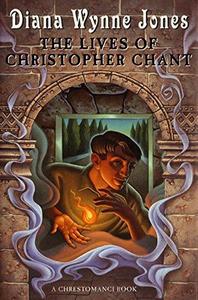 The Lives of Christopher Chant

The Lives of Christopher Chant is a children's fantasy novel by British author Diana Wynne Jones published by Methuen Children's Books in 1988. It was the fourth published of the seven Chrestomanci books (1977 to 2006). When the first four books were reissued in the UK to accompany the fifth as a matching set (2000), this one was subtitled The Childhood of Chrestomanci and cover illustrations by Paul Slater branded them all The Worlds of Chrestomanci.The "Chrestomanci" books are collectively named after a powerful enchanter and British government official in a world parallel to ours, who supervises the use of magic —or the Chrestomanci, an office that requires a powerful enchanter and is responsible for supervising. The Lives is set perhaps three decades ago in a world quite different from ours, during the adolescence of Christopher Chant who is Chrestomanci in five of the books.
Read more or edit on Wikipedia