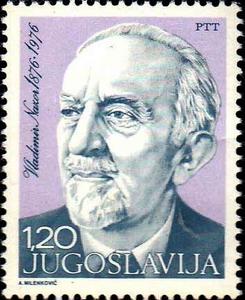 Vladimir Nazor (30 May 1876 – 19 June 1949) was a Croatian poet and politician. During and after World War II in Yugoslavia, he served as the first President of the Presidium of the Croatian Parliament (Croatian head of state), and first Speaker of the Croatian Parliament. Nazor is however most remembered as a well-known poet, writer, translator, and humanist. Although he was not an active politician until 1941, he had a significant political influence through ethical aspects of his work during prewar Kingdom of Yugoslavia.
Read more or edit on Wikipedia