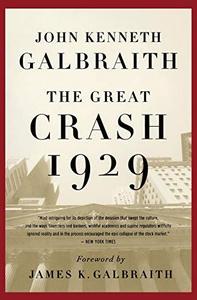 The Great Crash, 1929 is a book written by John Kenneth Galbraith and published in 1955. It is an economic history of the lead-up to the Wall Street Crash of 1929. The book argues that the 1929 stock market crash was precipitated by rampant speculation in the stock market, that the common denominator of all speculative episodes is the belief of participants that they can become rich without work and that the tendency towards recurrent speculative orgy serves no useful purpose, but rather is deeply damaging to an economy. It was Galbraith's belief that a good knowledge of what happened in 1929 was the best safeguard against its recurrence.
Read more or edit on Wikipedia