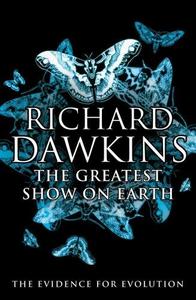 The Greatest Show on Earth: The Evidence for Evolution

The Greatest Show on Earth: The Evidence for Evolution is a 2009 book by British biologist Richard Dawkins, which was released on 3 September 2009 in the UK and on 22 September 2009 in the US. It sets out the evidence for biological evolution, and is Dawkins's 10th book, following his best-selling critique of religion The God Delusion (2006) and The Ancestor's Tale (2004), which traced human ancestry back to the dawn of life. The book is published in the United Kingdom and Commonwealth nations by Transworld, and in the United States by Free Press. In its first week of release, it topped The Sunday Times' Bestseller list, with more than twice the sales of its nearest competitor. An audiobook version has also been released, read by Dawkins and his wife Lalla Ward.
Read more or edit on Wikipedia