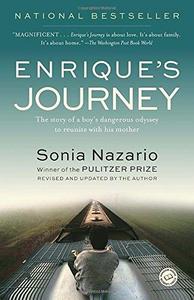 Enrique's Journey: The Story of a Boy's Dangerous Odyssey to Reunite with his Mother is a national best-seller by Sonia Nazario about a 17-year-old boy from Honduras who travels to the United States in search of his mother. It was first published in 2006 by Random House. The non-fiction book has been published in eight languages, and is sold in both English and Spanish editions in the United States. A young adult version was also published in 2013 aimed at children 10 to 14 years old and reluctant older readers. The young adult version was published in Spanish in July 2015. It is based on a Pulitzer Prize-winning series of articles in the Los Angeles Times published in 2002 also by Sonia Nazario.Enrique's Journey has been chosen as a common or freshman read by over 200 middle schools, high schools, and universities nationwide. Facing History & Ourselves developed a six-week unit teaching guide to accompany the young adult version of the book.
Read more or edit on Wikipedia