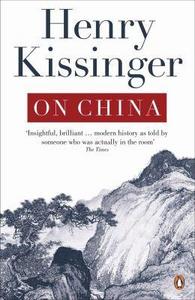 On China is a 2011 non-fiction book by Henry Kissinger, former National Security Adviser and United States Secretary of State. The book is part an effort to make sense of China's strategy in diplomacy and foreign policy over 3000 years and part an attempt to provide an authentic insight on Chinese Communist Party leaders. Kissinger, considered one of the most famous diplomats of the 20th century, played an integral role in developing the relationship between the United States and the People’s Republic of China during the Nixon administration, which culminated in Nixon's 1972 visit to China.Kissinger's book focuses on Chinese history through the lens of foreign policy considerations, particularly his own brand of realpolitik. The book begins by inspecting China's historical views on peace and war, international order and compares it to the United States' approach to foreign policy. The book follows how Sino-Soviet border clashes forced China to consider building a relationship with the United States. Kissinger records his own experiences in coordinating the 1972 Nixon visit, including authentic accounts on the nature of Mao Zedong and personality of Zhou Enlai. The final part of the book looks to the future of Sino-American relations, critiquing the areas which prevent the US and China from developing a mutually beneficial relationship whilst warning of the consequences of another cold war.The book is a combination of pure history, discussion of foreign policy and personal narration of Kissinger's experiences in China. It does not fit in to the genre of autobiography, memoir or monograph, but can be considered part reminiscence, part reflection, part history and part exploration in to the life of Kissinger and his experiences with China. The book has received various reviews since its release in 2011. The response to Kissinger was polarising with the book receiving varying responses from several newspapers and individuals.
Read more or edit on Wikipedia