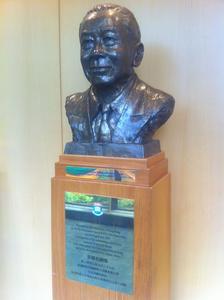 Rayson Huang, (Chinese: 黃麗松; pinyin: Huáng Lìsōng; 1 September 1920 − 8 April 2015), was a Hong Kong chemist, who was an expert on radicals. He was the first Chinese Vice-Chancellor of The University of Hong Kong, a position in which he served from 1972 until 1986.
Read more or edit on Wikipedia

A Lifetime in Academia