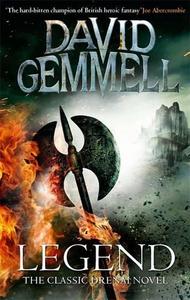 Legend is a fantasy novel by British writer David Gemmell, published in 1984. It established him as a major fantasy novelist and created the character of Druss, who would appear in several subsequent books. It was the first novel by Gemmell, and in The Drenai saga. Gemmell got the idea for the book in 1976. He was being tested for cancer, and to take his mind off it he tried writing a book, which he called "Against the Hordes". The fortress and its attackers, the Nadir, were metaphors for him and the cancer. In the end, he was found not to have cancer after all and he forgot about the book, which he claims wasn't very good anyway. However, in 1980, a friend of Gemmell's read the manuscript and told him that the story had potential. Encouraged, Gemmell set to work rewriting the book that would become known as "Legend". It was accepted by Century Hutchinson late in 1982. In 1984 Century Communications produced a game for the ZX Spectrum computer based on the novel also called Legend. The novel was included as part of the pack and acted as a form of copy protection for the game.
Read more or edit on Wikipedia