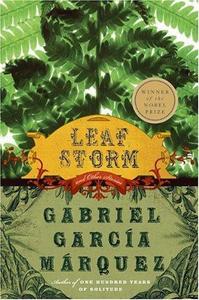 Leaf Storm is the common translation for Gabriel García Márquez's novella La Hojarasca. First published in 1955, it took seven years to find a publisher. Widely celebrated as the first appearance of Macondo, the fictitious village later made famous in One Hundred Years of Solitude, Leaf Storm is a testing ground for many of the themes and characters later immortalized in said book. It is also the title of a short story collection by García Márquez. The other stories compiled in the English translation are “The Handsomest Drowned Man in the World”, “A Very Old Man with Enormous Wings”, “Blacaman the Good, Vendor of Miracles”, “The Last Voyage of the Ghost Ship”, “The Monologue of Isabel Watching It Rain in Macondo”, and “Nabo”. Several of these short stories appeared elsewhere before being put into this compilation. “The Handsomest Drowned Man in the World” first appeared in Playboy magazine in 1971. “A Very Old Man with Enormous Wings” first appeared in New American Review and “Blacaman the Good, Vendor of Miracles” was first published in Esquire Magazine. The narrative of Leaf Storm shifts between the perspectives of three generations of one family as the three characters (father, daughter and grandson respectively) find themselves in a spiritual limbo after the death of a man passionately hated by the entire village yet inextricably linked to the patriarch of the family.
Read more or edit on Wikipedia