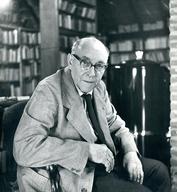 Jakobus Cornelis (Jacques) Bloem (10 May 1887, Oudshoorn – 10 August 1966, Kalenberg) was a Dutch poet and essayist. Between 1921 and 1958 he published fourteen volumes of poetry. In 1949 he won the Constantijn Huygensprijs, one of the country's highest literary awards, and in 1952 the P. C. Hooft Award for his literary oeuvre. In 1965, in rapidly declining health, he was awarded the highest Dutch-language literary award, the Prijs der Nederlandse Letteren. He was nominated for the Nobel Prize in Literature.Dubbed the poet of unfulfilled desire, he is hailed as one of the 100 greatest Netherlanders of the twentieth century.The Dutch poetry award J.C. Bloem-poëzieprijs is named after him. Source: Wikipedia (en)