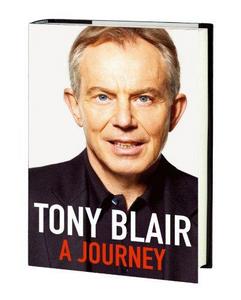 A Journey is a memoir by Tony Blair of his tenure as Prime Minister of the United Kingdom. Published in the UK on 1 September 2010, it covers events from when he became leader of the Labour Party in 1994 and transformed it into "New Labour", holding power for a party record three successive terms, to his resignation and replacement as prime minister by his Chancellor of the Exchequer, Gordon Brown. Blair donated his £4.6-million advance, and all subsequent royalties, to the British Armed Forces charity the Royal British Legion. It became the fastest-selling autobiography of all time at the bookstore chain Waterstones. Promotional events were marked by anti-war protests. Two of the book's major topics are the strains in Blair's relationship with Brown after Blair allegedly reneged on the pair's 1994 agreement to step down as Prime Minister much earlier, and his controversial decision to participate in the 2003 invasion of Iraq. Blair discusses Labour's future following the 2010 general election, his relations with the Royal Family, and how he came to respect President of the United States George W. Bush. Reviews were mixed; some criticised Blair's writing style, but others called it candid. Gordon Brown was reportedly unhappy over Blair's comments about him, while David Runciman of the London Review of Books suggested there were episodes from Blair's troubled relationship with his Chancellor that were absent from A Journey. Labour politician Alistair Darling said the book demonstrates how the country can be changed for the better when a government has a clear purpose, while the New Zealand Listener suggested Blair and his contemporaries had helped to write New Labour's epitaph. Some families of servicemen and women who were killed in Iraq reacted angrily, with one antiwar commentator dismissing Blair's regrets over the loss of life. Shortly after the release of A Journey, the screenwriter of the 2006 film The Queen, which depicts Blair's first months in office, accused Blair of plagiarising a conversation with Queen Elizabeth II from him.
Read more or edit on Wikipedia