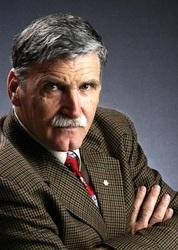 Roméo Antonius Dallaire, (born June 25, 1946) is a Canadian humanitarian, author, retired senator and Canadian Forces lieutenant-general. Dallaire served as force commander of UNAMIR, the ill-fated United Nations peacekeeping force for Rwanda between 1993 and 1994, and attempted to stop the genocide that was being waged by Hutu extremists against the Tutsi people and Hutu moderates. Dallaire founded The Roméo Dallaire Child Soldiers Initiative to help prevent the recruitment and use of child soldiers. He is a senior fellow at the Montreal Institute for Genocide and Human Rights Studies (MIGS) and co-director of the Will to Intervene Project which published a policy recommendation report, "Mobilizing the Will to Intervene: Leadership and Action to Prevent Mass Atrocities".
Read more or edit on Wikipedia