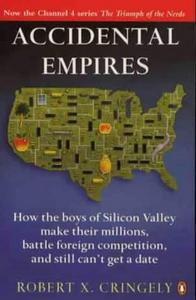 Accidental Empires: How the Boys of Silicon Valley Make Their Millions, Battle Foreign Competition, and Still Can't Get a Date (1992, 1996), is a book written by Mark Stephens under the pen name Robert X. Cringely about the founding of the personal computer industry and the history of Silicon Valley. The style of the book is informal, and in the first chapter Cringley claims that he is not a historian but an explainer, and that "historians have a harder job because they can be faulted for what is left out; explainers like me can get away with printing only the juicy parts." Notably, the book was critical of Steve Jobs and Apple, as well as Bill Gates and Microsoft.The book was revised and republished in 1996, with new material added. A documentary based on the book, called Triumph of the Nerds: The Rise of Accidental Empires was aired on PBS in 1996, with Cringely as the presenter.In February 2012, Cringely wrote on his blog that he will republish the book online, free for all to read.
Read more or edit on Wikipedia