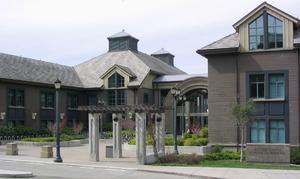 The Haas School of Business (Berkeley Haas) is the business school of the University of California, Berkeley. The first of its kind to be founded at a public university in the United States, it is ranked among the best business schools in the world by The Economist, Financial Times, QS World University Rankings, U.S. News & World Report, and Bloomberg Businessweek.Current notable faculty include former Chairs of the Federal Reserve and the Council of Economic Advisors, Nobel laureates in economics, the Secretary of the Treasury, the chief economist of Google, and more. The school is housed in four buildings surrounding a central courtyard on the southeastern corner of the Berkeley campus, where both undergraduate and graduate students attend classes; its resident startup incubator, Berkeley SkyDeck, is located west in Downtown Berkeley.
Read more or edit on Wikipedia